Man restores rare Australian car after buying it off eBay 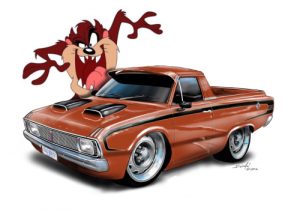 SALT LAKE CITY — Want a car no one else in town has? Something that’s really unique? Then buy one that wasn’t even made in the U.S.; it’s working for Wynn Allred and his 1971 Australian Valiant VG Wayfarer.

Allred said he was looking for a U.S.-built Plymouth Valiant on eBay when the “ute” popped up. Smaller, car-based trucks are called utes (short for “utility”) in Australia, and the Valiant is a Chrysler line, not a Plymouth model.Allred said the original owner married a guy who was in Los Angeles, and she brought it over from Australia in 1972. She outlived three husbands, but kept the same car. When she died in 1996, the second owner bought it from her estate. He painted the originally-white Valiant green. After 10 years, it went up for sale on eBay where Allred found it.He said some Bondo started coming off three years ago so he and a friend went to replace it, and more and more came out. Finally, they reduced the car to bare metal, straightened it out, and painted it. You may recognize the new color: It’s Tangerine Mist from the Honda Element palette.A 265-cubic-inch six Hemi –yes, a straight six Hemi- sits under the hood. Allred said it has upgrades including a Holley four-barrel carburetor and a “gnarly” cam. He claims 310 horsepower, and calls it “pretty quick.”
The expatriate Aussie is right-hand drive (meaning the steering wheel is located on the right hand side) which Allred said is only a problem when passing on a two-lane road. He lags way back and cautiously moves out until he can see if the opposing lane is clear, and then he said he “blows its doors off.” He has to take a friend when he goes to drive-throughs.He has a pan-Pacific relationship to help with parts: A friend in Australia has a wrecking yard, but also collects American cars. The two swap parts obtained in their home countries.His favorite part about owning the Aussie Valiant? “I have never parked next to another one,” Allred said.
Article Originally posted on KSL.COM By Brian Champagne, KSL.com Contributor   |  Posted Oct 6th, 2016